Menu
Install the app
TJ Fest 2021 Hats
Order your Jeep Wrangler TJ Fest 2021 hats today! Click here for ordering instructions.
You are using an out of date browser. It may not display this or other websites correctly.
You should upgrade or use an alternative browser.

So I have a 2005 Jeep Wrangler Rubicon, it’s got the 4.0 because all rubicon’s came with the straight six, but it has the 4spd auto, and I’d like to swap it to manual, I know it would be easier to swap the entire jeep but this has a close connection to me and it has the lockers, I don’t want the 6spd transmissions that were made during this stretch of years and would really like it to be a 5 speed but I don’t know if anything would match up, I’m basically just looking for information here before I really go ahead and do anything. I just enjoy driving a clutch a lot better as most people who drive jeeps do and I don’t plan on making this jeep a crazy build, rather just something that won’t get stuck with where I live, as well as fun to drive 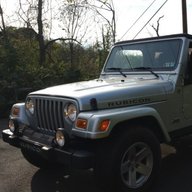 If you're considering the swap, the easiest way is to find someone who wants an auto and swap the parts. Not only do you need the transmission, clutch assembly, flywheel, shifter, etc., the PCM is also different between the two. It's definitely an involved process, but not impossible.
OP
D