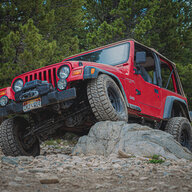 How it stands today: Keeping it simple for now. I've wheeled it all over Colorado and so far haven't run into issues keeping up with folks even on "hard" trails... guess I'll see how long that lasts.
Last edited: Thursday at 3:32 PM
Reactions: ranger101
OP

Since getting my TJ I've made it a mission to make as many functional improvements to the system as I can. With that goal in mind I've set out to convert the mechanically driven fan to electric to help with cooling and maybe free up some energy for the motor to turn my wheels.

Trim and bolt-up the fan to the radiator: The black wire goes to ground, the brown wire is power The wiring diagram: (The actual module is different looking, you'll see in the next pic). Ditching the Dana 35 for something a little more stout... and gearing up to 4.10s.

Teardown and soaked in seafoam Cut off the brackets and smoothed out the welds. Some minor pitting on the surface after scrubbing some of the surface rust off, I'm not going to worry about it. Popped the cover and did a spin test to verify it is actually 4.10 gears, which it is... I spy a little LSD in there. Brackets should be coming in a few days, then I can start making marks on the axle and setting pinion angle.

Got the brackets in today... unfortunately the fellas at ECGS can't read and didn't include the flange and other stuff I ordered... but I have enough to be dangerous...

Mocked up the brackets and started marking things with a paint pen. Had to draw a bead on the spring pads so they were a little more snug on the tapered part of the 8.8 tubes. I read on Iron Rock Offroad's site that if you're using an SYE that it's a good idea to set the pinion angle to 16* so I'll get that all leveled out in my garage (like a 2* slope in my garage) and start tacking things on.

Judging by the fitment of one of the swaybar brackets I don't think I'll be able to weld the tube all the way around on that side... Maybe I can weld a bead and grind it down a bit to make it work.

If my math checks out all the bracket locations should be corrected for actual measured axle here:

Got a code 43 today when leaving Cars and Coffee... I figured something wasn't right. One of the valves have been rattling since I got it. Time to order some springs.

Should I just replace springs and seals with Mopar ones or is it worth it to get something better? 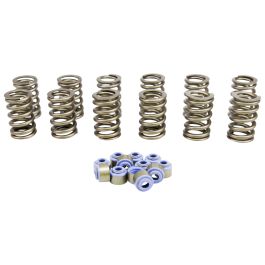