There are a couple of reasons you might want to do this. One is if you're like me and have connectors where the insulation at the connector has pulled back so you've got exposed wire. Another reason is maybe you're also like me and have the older style speedometer sensor that lets ATF leak through the connector. (or maybe you're also like me and have both situations.) The fix itself is easy but only obvious if you know how the sensor fits within the context of the speedo gear assembly, which I did not. I did my SYE 6 months ago so I had recent experience with removing the speedo gear and I still had no idea the sensor was a distinct piece of the overall assembly. I'm probably not alone in this.

Here is the new sensor. If you're like me, you're already confused because the sensor has a lot in common with the actual speedo gear thing, primarily in that it has a "drive shaft" and an O-ring, which might make you think the whole assembly that drops into the transfer case output housing is the sensor. But it turns out the sensor fits into the speedo gear assembly. It was not clear until I got under there, at which point it became painfully obvious. I was thinking I was going to need to swap the speedo gear, re-clock the thing, etc, but none of that is necessary. Here is the new connector. No rocket science involved here. If you already have the newer style sensor, your connector will already look like this. If not, you'll have to splice the new one in. 1. Disconnect the connector from the sensor. 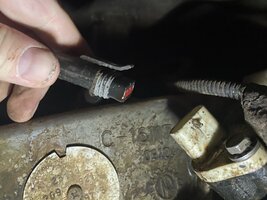 2. remove the bolt in the sensor, not the hold-down bolt. You won't have to touch the hold down bolt at all in this process. You can see the hole on the body of the new sensor. This is the bolt you need to remove. 3. Remove the sensor. You can attempt to wiggle it out, but I ended up using a screwdriver to gain a little leverage to pop it out. It did not take a ton of effort. It's only being held in by pressure and an O-ring. The O-ring will come out with the sensor. My O-ring appears to match my Lapis Blue paint, not sure if all the O-rings were color keyed from the factory or not. 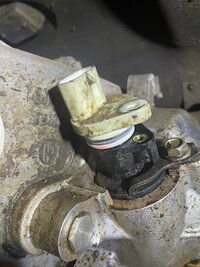 4. Insert the new sensor. Lube the O-ring with a little bit of ATF, and then push it into the opening. It took a little bit of downward force to get it to seat. I suppose it is possible to not have the drive shaft aligned properly with the receiver to completely prevent it from seating, but it would have to be perfectly misaligned. The edge is chamfered such that it should drop into position regardless of the initial alignment. You'll know once it is completely seated because the new sensor will be flush with the speedo assembly. If it's super hard, just spin it a quarter turn and try again. 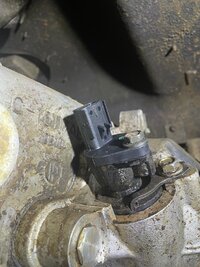 5. If necessary, rotate the sensor to align the bolt holes, and replace the 13mm bolt. I was unable to find the torque spec for this, but 15 ft-lbs is DEFINITELY enough. Less, probably.

6. If you need to replace the connector, now is when you would do that. Otherwise skip to step 7.

My connector looked like this prior to this repair. I have a lot of connectors in similar condition, would love to know why that happens. But that's a puzzle for another day. Today's mission is to fix it. 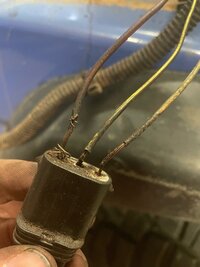 I'm not going to walk you through doing the splice, but I will STRONGLY recommend you don't use the crappy parts store insulated crimp connectors to do any wiring repair, ever. I prefer this style of non-insulated butt connector, but to each his own. And of course, cover it with heat shrink. Be triple certain you match like for like on the wires , since the colors on the new connector won't match the factory wiring. Cut/splice a single wire at a time so you don't even give yourself a choice on which cut wire to splice to. 7. Plug the connector back into the sensor.

8. Enjoy a Keystone Light and celebrate your latest conquest over the machine world.


Good luck! Let me know if I missed a step or need to make something more clear.
Reactions: machoheadgames, Chris and pagrey
P

I've worked with that connector before on a speedometer project. The connectors are called Delphi/Aptiv APEX 2.8 series. If you're looking for an alternative source that doesn't involve splicing the wires they are available from Ballenger Motorsports and the female connector is here CONN-76015.
Reactions: hear and Chris
OP

Thanks for that info. Most of the connectors on the TJ are available, the trick is knowing the part number. And I should've added that de-pinning the connector is another fine option, if you have those tools/skills and just need to clean up the wiring side of the equation.
Reactions: pagrey
M

Nice write up. Glad it was as easy for you as I thought I remembered it being for me. Very simple, makes more sense in person for sure.
Reactions: hear 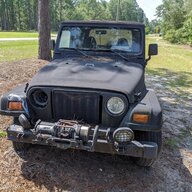 Very nicely done. Thanks for taking the time to do this.
Reactions: hear
OP

I found the relevant info in the FSM while looking for something else. This includes the correct part names, and also the torque spec which I had been unable to locate at the time of the writeup. This is found on pages 21-100 & 21-101 in the '97 FSM. (I don't know if those pages vary wildly across model years).