Menu
Install the app
TJ Fest 2021 Hats
Order your Jeep Wrangler TJ Fest 2021 hats today! Click here for ordering instructions.
You are using an out of date browser. It may not display this or other websites correctly.
You should upgrade or use an alternative browser. 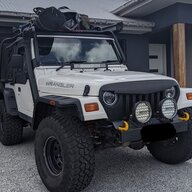 I've been installing the Rugged Ridge Mega Short SYE kit on my '99 TJ today (NP231 transfer case). Everything has been going well, until I got to the tone ring installation for the magnetic speed sensor.

I should note that I have the instructions and have read them, however they are quite vague in places which has led to me questioning if there's a bit left out in the process of installing the tone ring.
<https://static.thiecommerce.com/ass...6_72_pdf/d1860bbf8cd48831b38a87ef0049bda2.pdf> There is a recess just in front of the spline that the oil pump meshes to which seems like a circlip would fit in to. (Shown below, with output housing removed) A circlip would leave a small space between the oil pump housing and the tone ring and then allow the yoke to torque against the tone ring, marrying it with the movement of the shaft. (Shown below, with output housing removed) Is this what is supposed to happen? Is a circlip strong enough to torque the yoke and tone ring against (at ~180-200 ftlbs)?