Still no solution found. I took the Heep out to the mountains for a snow camping trip and drove it in higher RPMs for about 200 miles with seafaom in the crank case. Also I got better gas mileage (16-17 MPG) than normal (10-13 MPG). Got back into town and did my oil change, what came out had no glitters, metals, or debris so that was relieving. But it was really dark, I only had about a thousand miles on that batch so the seafoam and/or my more aggressive driving definitely had some sort of effect.

I went ahead with the Rotella T5 10W-30 Syn Blend and it did not fix the ticking in the cab noise. It did however make the engine sound smoother altogether and less ticky, other than this weird very random and unpredictable rattle/tick that doesn't go away until things are warmed up. Reminded me of a throw out bearing noise but a lot louder. So it quieted things up and introduced a new noise lol.

It's hard for me to say if it had any effect on the ticking in the cab noise, part of me wants to say it's quieter at times and louder at others depending on how long I've been driving it. It could just be placebo so I won't make any real opinions until I've been driving with this stuff in for a week or two. After this I may try Rotella T6, or I'm just going back to plain old conventional.

I did notice that the EVAP purge solenoid was clicking really loud at idle. Can't hear it with my head in the engine bay when I rev over the motor but either way I don't think this is what we're hearing. I haven't looked into it, just figured I'd mention it.
OP
L

Thanks for reporting back. Unfortunately I don't think swapping oils in going to fix it. I ordered some rocker arms and pushrods and plan to change them out over Thanksgiving break. I'll let you all know if it solves the problem.
OP
L

Ledfoot Lou said:
Thanks for reporting back. Unfortunately I don't think swapping oils in going to fix it. I ordered some rocker arms and pushrods and plan to change them out over Thanksgiving break. I'll let you all know if it solves the problem.
Click to expand...

I got my rockers in earlier than expected so I pulled off the old ones to check them out. Unfortunately (or fortunately maybe?) all the rockers looked nice and evenly wearing, with no abnormal signs that might cause a tick. The pushrods were also nice and straight with no mushrooming. I was going to install the new rockers anyway, however the Melling MRK 551-2 rockers I ordered don't have the oiling hole in the same spot. I didn't trust they would oil well enough, so i'm going to return them. I lubed everything up and put it back together with the stock parts. Still ticking, but I now feel pretty confident it's nothing to do with the rockers, or push rods. The springs, valves stems, and valve seals also looked good. 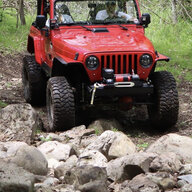