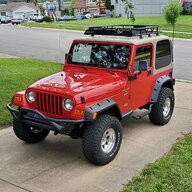 indio said:
By the way, I am a member of a CJ online group based in Georgia, and good lord the low rust CJs they have down south for reasonable prices, I drool every time seeing one posted for sale.
Click to expand...


I spent a year, deciding on an Expedition. Couldn't decide between first gen (97-02) or second gen (03-whatever). Pros and cons to both. Looked at a lot of first gens but the rust seemed to be, well, hard to find one without. Thought I had one up in Nebraska, but the guy was out of town and it was at a shop having a flat fixed and he'd call me and when I called him a couple days later, he'd sold it. That's when I decided to go second gen AND go south. Missed a couple in Tulsa, etc, and had been watching one for a month in Fayetteville, when mine came up. Figured I'd have a couple shots if one didn't pan out. Local detective that also carried a dealer's license. Was able to piece together warranty history through work and had a pretty good idea of its history. Now, had no idea if the owner had been pulling a 30ft travel trailer for 160k miles, but everything else was clean. No footprints on the headliner, no weatherstrip whistles....etc.

GorillaBiscuit said:
Geep4me... Haha! Yea it's kind of a crap shoot, you never know what your really going to be walking into. I've gone chasing great craigslist ads only to find out the pictures were from 10 years ago. Lol
Click to expand...


Back around '91-ish, I was looking for a '69 Charger R/T. Had to be a real R/T. Already had a '69 but it was rusty and not an R/T. Guy out in Hays at the time, big into Mopar. Had lots of stuff. I followed a couple ads for several months in Hemmings Motor news and finally decided, after the prices had come down over time, to inquire about one in particular. He mailed me pictures (that's how we did it in the old days..35mm....envelopes....stamps....) and the pictures showed up. They'd started the bodywork, pulled the vinyl top off, sanded the roof down, part of the hood, parts of the passenger fender and door. I decided to drive out and look. 5 hour drive just to look. Get out there and the car had been left, probably right after the pictures had been taken and every place that was shiny bare metal in the photos was now brown rust. (sigh) Mopar collector doing that to a rare care.......grrrrrrrr! Ended up buying it some time later.

GorillaBiscuit said:
JMT... Yea, an 05 X model with only 46k miles is awesome. I would seriously consider this jeep if it didn't have 173k on it. Sounds like you got a really good one too build on for sure!
Click to expand...

If you're going to stay on 33's a Rubicon is pretty perfect. With the right transmission you can keep the 4.10 gearing and get by pretty well.

If you're going to go to 35's a Sport or Sahara with the Dana 44 in the rear is a good place to start. You'll be regearing anyway, so save the cash you'd be dumping on a Rubicon and use it in the build.

Chapman4266 said:
I paid 14 for my 06 Rubi a few months ago. 89k miles and stock except for wheels and tires. That X would be going for less than 10k here easy. Dealers are always more expensive because they expect people to make payments

That's a great find, and in my favorite color. Mind telling me how you got your Jeep on those ramps? Looks like you'd have to come across the grass behind you. Why's the hood opeon on that white and orange car next to you? Changing some parts?
Reactions: MaloStapalo

I'll leave this and then the thread can get back on track.

The gal with the ebay Focus had agreed to let me send her partial payment, when the auction stipulated full payment within x days. I wasn't about to send all my money. She agreed to also let me ship her my CB and antenna, since post 9/11 I didn't feel boarding a plane with electronic devices that had been wired for portability would be welcome.

I'm sitting in the waiting area, post security, wondering if I was making the right decision. Butterflies in my stomach, $1000 already sent to Baltimore, one way ticket, hotel reservations for Baltimore and St. Louis made. I decided to call her, even though if she was out to scam me, there'd be no way to know that until the next morning and she doesn't show up. She said, "Oh yeah. It's ready. We were going to try and change the oil and transmission fluid in it for you, for the trip home, but we couldn't get the car up high enough to do it." I had this horrible thought of them putting the wrong transmission fluid in, or engine oil in the wrong hole, and ending up 50 miles outside of Baltimore with a toasted trans or locked up motor. That call did not help my butterflies, but I did sort of think, that if she/they were trying to scam me, that nobody could come up with such a lame story. They showed up at the hotel the next morning, she in a newer VW convertible, and the 2 dudes with their hippy headshop dreads up in a rastafarian head wrap (all white guys, LOL). One dude gets out of the Focus and the other two out of the VW. I start to walk around and check out the car. Been hit in the front but was put back together and presentable. No big deal. My wife (love my wife) might just run it into a ditch the first winter, so, eh. Get to the back of the car and open it up, and the dude proceeds to tell me the same story. Couldn't get it up, I'm like, not my problem, LOL, and there sitting in the back, along with my CB box, was a brand new 6 quart case of Quakerstate and filter. Score. 2 sets up jumper cables in with the spare tire. Score. Paid the rest of the money and wondered if that money was going to go up in smoke.

Left Baltimore after waiting for 3 hours to have tires put on. She called just as I was pulling into Indy for dinner and asked how it was doing. Told her I was in Indy. I could hear her tell her companions, "He's in Indianapolis!!!", like the thought of distance over time was an incredibly foreign concept. LOL. Made to St. Louis just after midnight. Car hummed along at 74+ and averaged 28mpg. 808 miles.

Again, not for everybody. There is risk. But there can be reward too. 10 something year's later, wife is still driving it.
Last edited: May 13, 2019
Reactions: GorillaBiscuit 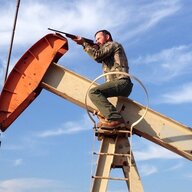 JMT said:
That's a great find, and in my favorite color. Mind telling me how you got your Jeep on those ramps? Looks like you'd have to come across the grass behind you. Why's the hood opeon on that white and orange car next to you? Changing some parts?
Click to expand...

It’s a car show we host. Just put it in there so we had a 4wd in the show. I just backed up against the curb and put a ramp in front of right front and left rear and 4L onto the ramps to show articulation. Wasn’t much, but it did the trick
Reactions: JMT

I see you're from Snyder. I think I noticed that in the ride of the month thread too. My brother in law used to live there. He moved about a year ago to Abilene. It's a small place! We went by there on the HWY on our way to and from Moab a few weeks ago. Your rig really looks great!
Reactions: Chapman4266 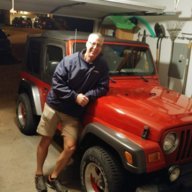 I'm getting ready to sell my stock (except for wheels) 2004 X with 67,000 miles. Will list it at $14K and see what I can get for it. Only selling it to pay for a couple of semesters of college for my daughter. 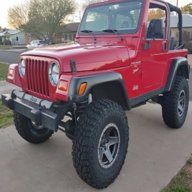 With that said, the X sounds way over priced. Fairly high mileage too.
Reactions: Chapman4266 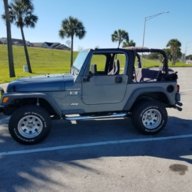 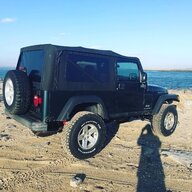 Keep looking! I just bought last month a 2006 LJ Rubicon 98k for 9k! Some people don't know what they have and deals do pop up. Good luck! 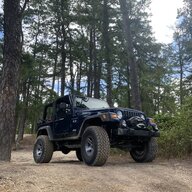 Not sure how I ended up here

Go to Gilbert Jeeps website , Athens , Al. He sells nice ones. Tell Grant that Andy sent you , and he ain’t gettin my Rubicon back.
Reactions: MaloStapalo and GorillaBiscuit
OP 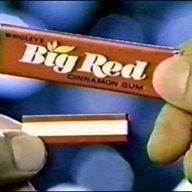 Gaabbee... Damn! An LJ Rubi with under 100k miles for 9 grand! You got a sweet deal!
Reactions: wolf1790, gaabbee and MaloStapalo 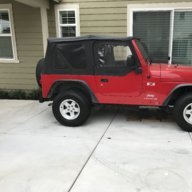 GorillaBiscuit said:
Hey guys, I came across an 06 Wrangler X at a local dealer and just wanted to check here with you guys and see if the price is reasonable.
The Jeep is in nice condition, no rust or anything, but it's not amazing or outstanding. It's an X model with 173k miles. It's got the inline 6 engine, full doors, hard top, AC, cruise control, 2" lift with steel wheels and 31x10.50 tries on it. The wheels, tires, and lift kit are nothing special, no high end brand names or anything.
The Carfax shows an accident with minor damage to the front right, and it seems to have been repaired. They are asking $13,000 for it, and are pretty firm on that price.
Is 13k a bit steep for a nice X model, or is it about average?
What are you guys finding out there? I haven't been able to find anything decent at a reasonable price at all! I completely gave up on finding a Rubicon, prices on those around here seem to start at 20 grand for rusted out auction vehicles!
Click to expand...

JEEP STUFF FOR SALE OR TRADE Please post a photo with a description (Miles, condition, accessories, upgrades, or issues), location and price! PLEASE READ THE PINNED POST FOR ALL OF THE RULES!!!!... 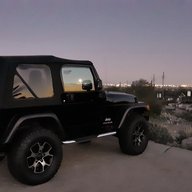 I may be an exception but I paid $7,300 to an original owner for an 2003 Sport, automatic with 4.0ltr and 137k miles with AC and cruise control. It needed a paint job and a weekend of elbow grease. That was nearly 3 years ago. 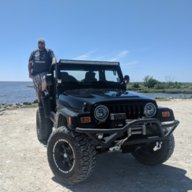 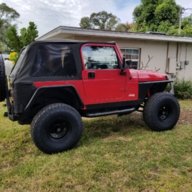