Survey: Who has a turbo / supercharger / stroker and why? 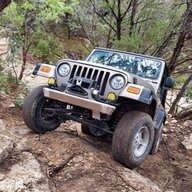 bluescapegoat said:
Also to expound on this, don't expect an mpg increase with any forced induction. It works on new cars that are built around it, and efficiency is the game, but slapping something on a 4.0 will, at best, result in the same mpg, unless you want to start getting into lean burn tuning which would only be out of boost and is irrelevant.

Which brings me to the tuning, if I'm not mistaken the Banks comes with preset tunes on some sort of proprietary device. If you want to actually adjust any individual parameters you'll need to get an HPTuner and the credits for your VIN. I could be wrong though, I don't know the capabilities of the Banks tuner. But I do have a raw copy of a Banks tune pulled from the PCM using... an HPTuner lol
Click to expand...


This is good. Exactly what I was looking for. Thanks 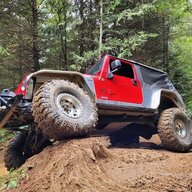 bluescapegoat said:
Talking to Boosted Tech on the phone made me want to jump off a bridge.
I actually hung up on them the first few times I called cause I thought I was getting an automated answering system but it's just the way he talks. And any time I would ask a question there would be a long pause, then a one word response that wasn't even related to the question I asked, then another long pause, then a different topic. It was very odd. I'm an air traffic controller by trade, I'm pretty good at picking up on odd communications, foreign languages, weird responses, etc. I'm usually in control of the conversation. They're like from a different planet or something. Just bizarre. And I'm pretty sure I talked to the same guy every time but he would always act like I'd talked to somebody else. It was bad enough I decided not to use their support or tuning services at all. I've still been chasing a couple issues, the Jeep was erratic between open and closed loop, so I'm running in open loop all the time now and it cuts fuel above 95% throttle maybe 10% of the time.

Aaaaanyway, I Just got a new map sensor and injectors this week, tossing those in and tuning the PCM directly and ditching the Split Second. I've also got a wideband and boost gauge with analog feeds into an HPTuner ProLink so I can do full data logging. I've learned a whole lot about tuning in this whole process, and the NGC PCMs are not an overly simple beast.

The physical quality of the kit and machining is great, however.
Click to expand...

What was your results with ditching the split second and 7th? I’m picking up a boosted tech setup and hope to do the same thing. 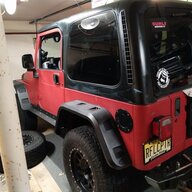 Also looking for insight on this topic. 2 yrs into the boosted tech system and id like to get my IAT mounted properly, the correct injectors and start moving on with life.

I drilled a coupler and plastic welded in my IAT. Works great

Here you can see. Lopped off the one on the stock intake.

Yeah, early models had it on the Manifold. Whats occupying the iat port right now?

Tldelaney said:
Yeah, early models had it on the Manifold. Whats occupying the iat port right now?
Click to expand...


a stupid plug that Mr Robot Voice Man gave me in his black and white instructions to install this supercharger.

IAT installed into original place in manifold. Issues with cold/hot starts eliminated immediately. Inquiring about water/meth injection now. I need to get this jeep on a diet of that stupid split second box. I would love to finally take it on some trails that may require some water crossings and not have to worry about getting that box wet, AND get rid of my stock air cleaner from under the hood. Or maybe finally return it to its original use as the K&N filter just floats there on my passenger side of the engine.

You gotta replace that box with some real tuning specific to your jeep.

Tldelaney said:
You gotta replace that box with some real tuning specific to your jeep.
Click to expand...


I have emailed mr ryan at FRP and ive been given items to purchase as the funds allow to make this transition to PCM tune instead of piggyback junk box "tune". I know the boosted tech setup is absolutely not ideal but ive unfortunately invested in it already and will make it work moar better. Purchase of the correct larger injectors and the water meth kit is on the list as well as the 2 bar Neon map sensor.
Share:
Facebook Twitter Reddit Pinterest Tumblr WhatsApp Email Share Link
Top Bottom