Only half of instrument panel lights work after LED install

AndyG said:
Do you have any aftermarket powered accessory in that vehicle particularly tapped to the fuse box or any circuit?

If you do remove that before you try anything else.

I had no rear defroster and it turned out that I had my backup camera tied to the cluster circuit and that was confusing everything.

You can cross one wire on a TJ and flash your lights and it will change the channels on your television.
Click to expand...

No nothing that I know of wired through the fuse box. 3 sets of lights just wired straight to the battery with a relay and it’s own fuse.
Reactions: AndyG 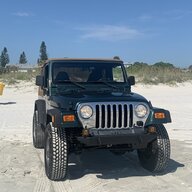 Corbinlane said:
Another thing I just thought of, the dome light and floorboard lights don’t come on from an open door. They only come on when you turn the dimmer knob till it clicks. The button the door pushes does not have a cap on it. They are able to pop out and get pressed in. Maybe the plug goes there? Maybe that has something to do with the other lights?
Click to expand...

He's correct if you remove the speaker cover you will see it right there.
OP

Cool I’ll open up the speaker deal tomorrow. I wish the wiring wasn’t so crazy behind the dash. It makes it hard to trace any of the wires. I appreciate the feedback and help though. I’ll give an update tomorrow to what I find out.
OP

Is this the ground you referenced? Well it looks to be secure.
I just found a small fuse box under the steering column which is blown. Headed to get a new fuse in hopes it important! Not the one in the picture but one back towards the engine more. As far as I know.... the only fuse boxes in the TJ are behind the glove box and in the engine compartment on the passenger side fender.
Hopefully replacing the fuses in that small box have some results.
OP

CharlesHS said:
As far as I know.... the only fuse boxes in the TJ are behind the glove box and in the engine compartment on the passenger side fender.
Hopefully replacing the fuses in that small box have some results.
Click to expand...

It didn’t fix anything. Not sure what it’s for but it’s changed at least.
OP

Corbinlane said:
Anyone know what this should be plugged into? I’ve looked for the other end and can’t find another open plug.

Looks like it plugged into the top of the dimmer, can anyone confirm? I followed it to the same ground by the speaker. It was cut a little so I replaced the wire. I’ve found 3 wires which are not connected to anything. Is that normal? I’m thinking since this is an SE and doesn’t have any cruise control stuff on the steering wheel maybe the wiring is the same for all and some isn’t used? Or does it look like they should be connected to something? So I just plugged in the left (grey) plug to the cluster and the small safety lights all powered on. Then removed and plugged in the right (black) plug and nothing happened. Turned on the headlights and dome lights and still nothing. I think I found the culprit. This the the plug for my headlight and dimmer switch connection. Anyone know where to buy another one? Corbinlane said:
Looks like it plugged into the top of the dimmer, can anyone confirm? I followed it to the same ground by the speaker. It was cut a little so I replaced the wire.

I confirmed this is the correct location.
OP

Corbinlane said:
I think I found the culprit. This the the plug for my headlight and dimmer switch connection. Anyone know where to buy another one?

I found the plug on amazon and it will be in next weekend. I will update everyone once I switch it out. Hopefully this fixes the problem. Next weekend I should get the relay, this plug, and the fuel pump. Next weekend will be fun but should have the Jeep running right after all that minus a larger lift.
Reactions: DaYooperTransplant

Corbinlane said:
I think I found the culprit. This the the plug for my headlight and dimmer switch connection. Anyone know where to buy another one?

Alright everyone I have an update and the results have not been good.
I changed out the wiring harness and put the instrument panel back in an all the same lights work or don’t work, no real change. Now I tried the famous smack on the top and I saw a brief flash of blue (my new LED’s). I started moving the panel around taking off and on and leaning and so forth. I found if not all the way on and tilted towards the floorboard I was able to get them to light up and stay lit up. But once pushed in or moved slightly they went out. Any idea as to why it has to be in a certain position?
The prongs on the instrument panel all see straight and clean. The plugs in the Jeep, they all looked clean and such. On the Jeep Cherokees of your vintage there was a problem with the instrument cluster buss connectors where they would develop black specks on the terminals. Sometimes parts of the cluster would go DEAD and then respond again at a later time; other times the entire cluster would go dead. My 1998 XJ 4.0L started having this problem after owning the Jeep for 4 years. The Jeep was in the dealership numerous times; the problem always returned. There was a Technical Service Bulletin that addressed cutting both of the old buss connectors off and attaching new connectors. Not saying this is your problem, but the symptoms are similar.
For me... even after the TSB was performed (new buss connectors installed); the problem returned two months later. This will sound odd..., but I stumbled across a solution for my problem. Every time the cluster would go dead; I would flip the turn signal switch to make a right turn and the cluster would come back to life. Never did find a permanent fix for the problem, but making the right turn would provide a semi permanent fix until the next time.
Reactions: Corbinlane
You must log in or register to reply here.
Share:
Facebook Twitter Reddit Pinterest Tumblr WhatsApp Email Link