Someone left a note on my Jeep 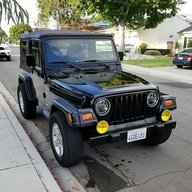 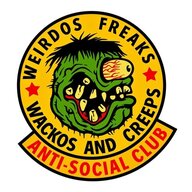 Perfect...tell him to bring cash and meet you at the Del Amo mall parking lot this weekend to do the deal. Waste a bit of his time.
Reactions: reddvltj and Willys LJ
OP

PatMc said:
Perfect...tell him to bring cash and meet you at the Del Amo mall parking lot this weekend to do the deal. Waste a bit of his time.
Click to expand... 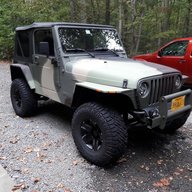 mxz800 said:
Now that I have a little time I'll share the sob stories. (I know its going to be long sorry in advance) The first guy left a note, then two days later I get a knock on the door. He said he noticed that I wasn't using my Jeep (I had no idea there was a law), I didn't need to but I told him that because I have a lot of cars, it depends on what I'm doing that day if I use the Jeep, or one of my cars.

Then he tells me that his parents have to go for treatments etc. and need something that is small and gets good gas mileage. I wouldn't never think of Wrangler and good gas mileage in the same thought. Since I have a lot of cars and his parents don't have money, well you know the rest.

The second guy comes to the house, tells me he is a friend of my Uncle then tells me he will take the mustang, and would also grab the jet ski's. I said you need to talk to my son who lives next door, he just left his stuff over here its not mine. Well he says but I don't know your son, can't you talk to him? Hell I don't you, but here you are. I kid you not he came to my house three times, talked for a good hour each time trying to be my pal. I called my Uncle told him, he said he isn't my friend I just know him. If my dogs didn't lose their minds when someone knocks I wouldn't have answered.

The third guy left a note on the mustang, then knocked on my door, I wasn't home but my DIL was at my house using the printer. Amanda told me this guy in his twenties told her he wanted the mustang because he wanted the wheels, and tires. Amanda said the guy was covered in grease, and oil etc. and told her I'm not usually dressed like this but I'm going on a date. She had a hard time not laughing, and really wanted to ask what he dressed like when not going on a date.
Click to expand...

This is why my anti social ass couldn't live in a suburban neighborhood. If any of these guys hopped over my locked gate, passed all the no tresspassing / restricted area signs and hoofed down my driveway to knock on my door, he would quickly realize that I was not looking for a buddy to hang out with. The barrel just looks huge if you are staring at the wrong end of it.
Reactions: Fixer6 and reddvltj 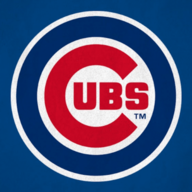 Please, please, please tell me you said something fantastically crass at him after that hilarious offer.

Several years ago, I had a car for sale. Listed it on the usual sites. A woman called me up, telling me that she's the aunt of a friend of mine (should've been a red flag right there).

Me: (after laughing) "No. That's less than a quarter of my asking price."

Her: "Well, I ran it through Kelley Blue Book and it came back at the amount you want for it."

Me: "Yeah? I ran it through KBB, too. Did you make sure to add all the options and the low mileage?"

Her: "No, but I doubt you'll sell it for the price you're asking."

Me: "Thanks for your interest."

I sold it a week later to a guy who was starting his own business. He paid me my asking price.
Last edited: Dec 13, 2019
Reactions: Mrprez and Squatch

moab said:
Found this on my Jeep this week. About the contact the guy. Just to see how much he lowballs me. lol.

I wish you would post bob's number, then we can all call him... giggle 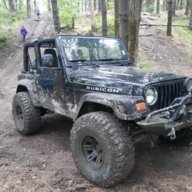 A week after buying my Rubicon this past spring for a shade under 6k, guy at a gas station in my town offered me 9k on the spot for it. His bank was across the street and he’d go get the cash now... should of took it but I liked it too much / new to me factor. Seen him about a month later and the offer was still good but it and also should of took it. 6 months later, Now the JL bug is hitting me hard so if I see him again... 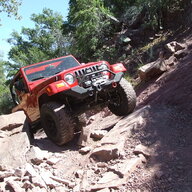 Location
Somewhere in the desert

I get offers all the time when I drive my K10. At stop lights, convenient stores, the recycle yard. I’ve had people follow me to work and home just to look and make an offer. The best so far is $20k. I had a guy show my $12k in $100 bills once. My answer is the same every time. I’m going to be buried in her. Since my last K10 was stolen I’m very careful. It has a well hidden kill switch and stays in the garage. Here’s a partial pic of her with a beautiful AZ sunset from Josephine canyon. I get “nice jeep” a lot when I’m out with it but never any offers it buy. I have to admit the Chevy is my first love and the Jeep is my mistress.
Reactions: Jamison C, mushdogs and Mrprez 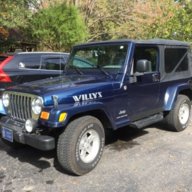 I love those old square Chevys and GMCs. Those are what occupied most of my time between my last Jeep and this one. When they started being looked at as classics and prices went up to match Jeeps, I decided to go back to my first love.
T

Here's the answer to ALL the stewpit lowball offers that *I* have been getting over the last 152 years: "Yeah, that sounds good...when can you give me the REST?" 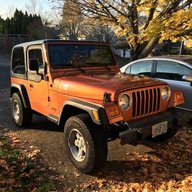 Squatch said:
The fact that he called it a "car" tells me it will likely be a really low "lowball" offer. Be sure and let us know!
Click to expand...

My problem would be if you called it a rig. I’d throw up in my mouth

AndyG said:
My thought exactly . The only worse thing is when TJ owners get on here and call it a "car" or use these words -

We are now fining people for that. I docked a guy minus 50 points for calling the back area the trunk.

We can't just let folks run willy nilly. I'm not sure what willy nilly is , but I'm against it .

What you do is slap it on the closest car and drive off . Spread the love. Especially if it's a cop car.
Click to expand...

That would be me and it’s a god damn trunk

If someone calls my car a rig it makes me wanna throw up. I think: Oh god are people putting me in the truck guy community? 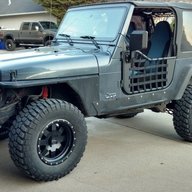 Zedd said:
My problem would be if you called it a rig. I’d throw up in my mouth

Why sweat the petty things?

I call it a rig all the time. Especially now.
Reactions: reddvltj, Hound Dog and Squatch

I call it a rig all the time. Especially now.
Click to expand...

I'm dumbfounded that he asked if it is 4wd or 2wd. That is like trying to buy a Corvette and asking if it has a V8 or a V6.

I've heard that some the JKs are 2wd for Postal Carrier use.

I don't understand the big draw of the JLs. They have an entirely too short pick-up bed and LEDs on the fenders. They're ass-expensive.

In my mind, they're like the GoPro cameras. There's such a lusting for "the latest HERO camera" that you can find earlier model cameras for unbelievably cheap.

Jeffreybomb said:
I don't understand the big draw of the JLs. They have an entirely too short pick-up bed and LEDs on the fenders. They're ass-expensive.

In my mind, they're like the GoPro cameras. There's such a lusting for "the latest HERO camera" that you can find earlier model cameras for unbelievably cheap.
Click to expand...