NDSpeed said:
So your Speedo is connected to factory instrument cluster?


No he has the Intellitronix digital dash too. 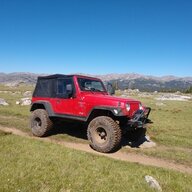 NDSpeed said:
So your Speedo is connected to factory instrument cluster?


No, I have a intellitronix digital gauge cluster made for the Jeep TJ. Pretty sure I posted some pictures here. I went this route since I ditched the Jeep PCM.
Reactions: Wildman
OP

Tomorrow will be the maiden voyage of the R2.8 on some trails in the Big Horn National Forest with my good buddy Berry. I am charging the spot now just in case, LOL.
Reactions: zebra12, Wildman and rasband

nuffsaid said:
Tomorrow will be the maiden voyage of the R2.8 on some trails in the Big Horn National Forest with my good buddy Berry. I am charging the spot now just in case, LOL.
Click to expand...


Look forward to your report on how things go.
Reactions: nuffsaid 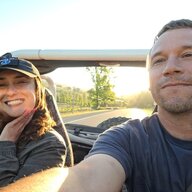 Does cummins still ship the 2.8l with the plastic oil pan or is their optional aluminum one standard these days?
Interesting that the gm output shaft in the nv4500 can't hold up to the 6bt. Speaking of the nv,can it be adapted to the r2.8l?
OP

Had a great day running some trails. First issue was engine heat, the climb into the Big Horns is about 15 miles of continuous 10-15% grade dirt road. After about 5 miles 2nd gear at about 2200 rpms engine temp hit 225 and triggered a check engine light. Let the engine cool for about 5 minutes and dropped to first gear. Made it to the top of the climb at 9200 feet to cooler temps and a more gradual climb and the engine coolant settled in at around 180 for the rest of the day on the trails. The Murphy gauge that comes with the R2.8 has a function that shows how many gallons of fuel have been used, not sure how accurate it is, but it looks like I used a little over 8 gallons of fuel for 11 hours of driving, and a solid 5 hours was in low range rock crawling. Some of the rock obstacles were pretty big and I got out more than once to check clearance of the oil filter to front differential and make sure no rocks were getting close to my plastic oil pan. All was well! Down the mountain we came and when we got back on the highway with ambient temps around 90+ coolant temp started climbing again. If I held the speed to around 60 the coolant temp was right around 214 F, if I tried to up the speed a little the temp started rising and I had to back off. I am really questioning if the electric fan I bought is delivering the 3000 cfm of air flow that it promised. At an idle, the fan will cool the engine quickly, but it isn't transferring enough heat when the load is increased. More testing needs to be done and I don't know how much this will change when the engine is fully broken in. At the end of todays ride I now have 300 miles. Overall I am very happy with the results, this isn't a hot rod, but the power is good and the drivability is great and the mileage seems to be awesome!
Reactions: teddill, Rickyd and Apparition
OP

Rickyd said:
Does cummins still ship the 2.8l with the plastic oil pan or is their optional aluminum one standard these days?
Interesting that the gm output shaft in the nv4500 can't hold up to the 6bt. Speaking of the nv,can it be adapted to the r2.8l?
Click to expand...


As far as I know they all come with the plastic oil pan. I believe quickdraw has adapters for the Nvg 4500 to the R2.8
OP

I went ahead and ordered the mechanical fan adapters from quickdraw and I will be installing the mechanical fan that was on my 4.0 since it had a new fan clutch and hopefully the oem shroud lines up with the new engine. I though about machining the adapter myself, but my choices for stock were limited and laying out a perfect hole pattern for the fan would be a challenge.
Reactions: teddill and Wildman
OP

I got the fan adapter and removed the electric fan. I installed the mechanical fan that was on my 4.0 with the newer fan clutch it had. After playing around with the fan shroud a bit, I decided to turn it upside down for better side to side fitment and it worked out great. I took the Jeep on a short road trip of 7 miles each way and by the time the engine got up to 195 degrees it was already getting cooler as the thermostat was now open. By the time I got back home engine was at 183 and dropping. Had this run been with the electric fan, I would have been close to 215 since it wouldn't turn on until 195. The outside temp was about 94 degrees when I ran this test.

I haven't had a chance to drive the Jeep this week because I had a check engine light fault code for a EGR malfunction, the EGR valve was failing it's self diagnostic test and while I couldn't detect any difference in the way the engine ran, it was possible with this code for the ECM to pull power from the engine. I have a new EGR due to show up either today or tomorrow on warranty from Cummins depending on how fast next day delivery actually arrives.
Reactions: Wildman and Rickyd
OP

I got the new EGR today and installed it. Code was still hard set after the new EGR was installed. I got out my Autel scan tool again and entered in Foton Light Truck and selected ISF for the engine and was able to read the codes. Then I tried to erase the codes and it failed. I selected ecu information and it came up as the proper ecu part number and Cummins. I tried to erase the codes again and this time it worked. As soon as I selected the Foton with Cummins engine it showed J1939 which is what is required to communicate with the Cummins ECU. Codes are all cleared now.
Reactions: Rickyd and Wildman

Do you know what was going on with the valve?
OP

The code only stayed away for the current key cycle. As soon as I entered a new key cycle, the code was back. I tested the pins between the egr connecter and ecm connector and I have continuity on all the wires, starting to think it is a ecm issue now.
Reactions: Wildman
Share:
Facebook Twitter Reddit Pinterest Tumblr WhatsApp Email Share Link